Today, the State of Louisiana covers an area of 51,855 square miles. Louisiana is positioned in the Deep South, between Texas and Mississippi, and south of Arkansas. The Gulf of Mexico defines the southern border of the state.

Louisiana stretches 130 miles east-west, and 379 miles north-south. It occupies 51,843 square miles. The highest point is Driskill Mountain, in north Louisiana, at 535 feet above sea level. The population in 2010 was about 4.5 million residents.

Louisiana Destinations is a virtual tour of the many interesting cities and towns and attractions that Louisiana has to offer, and learn more about this fascinating state ... from Alligators and Gumbo, to Swamps and Zydeco!

Louisiana has a diversity of cities, including larger ones such as New Orleans, Shreveport, Baton Rouge, Monroe, Lafayette, and Lake Charles.

But the state is filled with many smaller towns and villages. We include on this website over 60 travel destinations in Louisiana, and don't miss our special section on the Louisiana State Capitol in Baton Rouge.

For starters, take a tour down historic Bayou Lafourche with stops along the way in Labadieville, Thibodaux, Houma and down to the Gulf of Mexico at Grand Isle.

While in South Louisiana, be sure to visit other popular area destinations this spring including Breaux Bridge and its Crawfish Festival, St. Martinville, Lafayette, Morgan City, New Iberia along beautiful Bayou Teche, and Henderson.

And don't miss the North Louisiana hill country communities such as Ruston and historic Natchitoches. 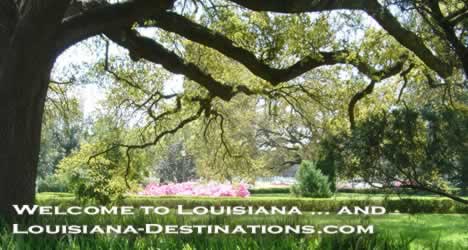 
Other Louisiana Areas, Facts and Information

Louisiana State Seal and Other Facts