Mardi Gras is celebrated in cities and towns all around Louisiana, from north to south, east to west.

Included below is a list of highlights of the extensive Mardi Gras carnival season scheduled in Louisiana, focusing on long-running Krewes and those with widespread appeal.

Click on Krewe links for details and parade schedules and dates. Many dates are preliminary, or have not yet been set.

This magnificent, costumed, beaded and feathered carnival is rich with tradition and is all about having a good time! The traditional Mardi Gras colors, dating back to 1892, are purple (justice), green (faith) and gold (power).

Mardi Gras is always on the Tuesday before Ash Wednesday. The day  before Mardi Gras is known as Shrove Monday or Lundi Gras.

The next Mardi Gras in Louisiana is scheduled for February 21, 2023.

Long a Mardi Gras tradition, the King Cake is made from a rich dough and filled with cream cheese, cinnamon, chocolate, or other goodies. It is topped with a glaze and sprinkles, in the Mardi Gras colors or gold, green, and purple.

There is traditionally a small baby inside the cake ... whoever gets the baby in their piece of the King Cake gets the honor of bringing the next cake to the party or office!

It's just not Mardi Gras without a King Cake! 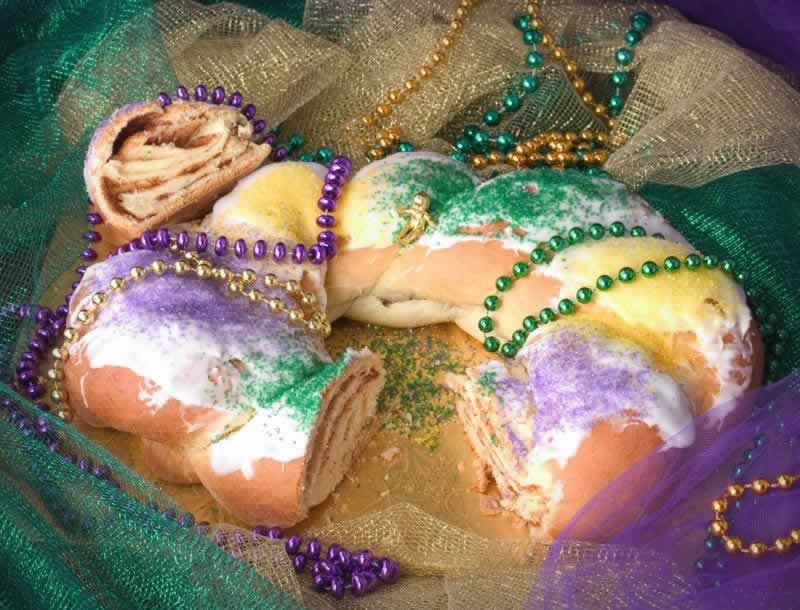 Easter is on the first Sunday after the first full moon after the Spring Equinox. The date can range from March 23 to April 25. Ash Wednesday is 46 days before Easter, and Fat Tuesday is always the day before Ash Wednesday.

With that said, here is a list of the next five Mardi Gras dates: